Guest post by Khristi Lauren Adams, author of Parable of the Brown Girl 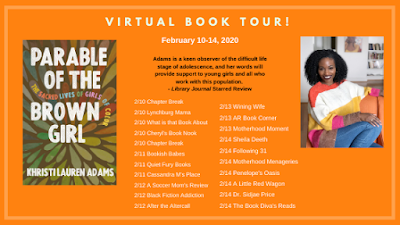 What writing this book taught me

Writing this book has taught me about trusting the process. I’ve heard the phrase “trust the process” a great deal in the past year. I first heard it at a Philadelphia 76ers game when one of the players 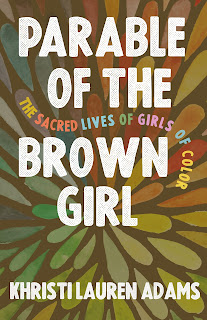 stepped to the free-throw line and the crowd kept shouting, “trust the process!” I asked my friend what they meant by that phrase. He told me that it had to do with the strategy that the team used in being patient in how they were going to build a successful team. The key to that success was learning to trust the process. As I started writing, I thought about that phrase quite often. The process for writing a book can be quite challenging. It’s not only challenging because one needs to find the time to be able to write, but also challenging emotionally and even physically. I wasn’t sure how the book was going to turn out nor was I sure if I would even be able to make it to the end where I felt like I had a successful piece of work. It took months of writing and sending chapters to my editor and getting feedback and then rewriting. That process went on for about a year. Even now I find myself in a place where I have to learn to trust the process of putting the book out in marketing and promoting it. Parable of the Brown Girl was complete in the summer of 2019, but it isn’t until February 2020 that people will be able to purchase the final product. That is a significant time of waiting which means that patience is also a part of the process. I have found myself anxious and wanting to get out ahead of the process but I have been reminded that God has a plan for how this book will unfold and I have to position myself to trust that plan. I’ve learned a lot about myself and I have grown as a person, not just from the content of the book, but the overall process of writing it has taught me a great deal about trusting God in areas of my life where I am waiting for something. I have learned that running a marathon is much more about how you grow during the training for that marathon as much as when you cross the finish line.

Posted by Bookish Fangirl at 8:08 AM No comments:

Excerpt of The Winter Duke by Claire Bartlett

Thank you so much to Tanya for allowing me to flaunt my beautiful girls and their fledgling romance. In this excerpt, Ekata feels stuck when contemplating her next political move, and her marriage-of-convenience bride Inkar tries to counsel her:

"Where did you go?" Inkar had a blanket pulled over her knees and the Kylmian grammar book propped upon them. Her hair fell in front of her face, making her look smaller somehow, more vulnerable.

I should have lied to her. The trial marriage would be over in four more days, and she would be gone by then. Instead, I shut the bedroom door and went to my wardrobe. "I was visiting Yannush. He'll help me in exchange for exile."

"I thought you were going to execute him."

"I still might." He'd crossed lines that should never be crossed. "Father would."

"You keep talking about him as though he is everything that matters." Inkar set the grammar book aside and drew up her knees, propping her chin on them and tucking a sun-streaked lock of hair behind her ear.

"He - it's difficult," I muttered, trying to undo the button between my shoulders. I should have called for Aino, but I'd had enough of her sniping at Inkar and making snide comments in Kylmian.

"I can help you." Inkar slid off the bed, hissing as her bare calves touched the air. A few moments later, her fingers brushed the back of my neck. My skin prickled. She slid the first button free and began to work her way down my back. Each light touch made my breath hitch.

"That's not what I meant," I said, struggling to focus. Father was far from everything that mattered, but he reached through everything that mattered. Like an illness that rooted in a specimen and spread through a population. His cruelty had become normal, and if I didn't pretend I had it, I'd be torn apart. "I can either be him or be used by people who want to be him. If those are my only options, I know what I'll choose."

She was silent for a moment as she finished unbuttoning my dress. Then she said, "My father often told me that I had to think about what kind of leader I would be. He said we would discover ourselves in battle. You have not been given many battles to discover yourself. But I do not think you will discover what kind of leader you are if you are always chasing after him."

Her hand appeared around my side, holding the long lace of my corset. I turned to take it and met her eyes. They were too close, too kind. No one in my family had eyes like that. I could see the soft fuzz on her cheek, and firelight tipped her eyelashes with gold. Her mouth was slightly parted, her brow furrowed in concern. How could she be so sincere? Among my family, such sincerity would crack us open, and the wolves would descend. I'd only been safely myself with Aino and Farhod.

I took the lace and her hand, too. "I don't have time to learn to be the right kind of leader." Every misstep brought Sigis closer to winning the coronation trials, no matter what I learned from it.

I felt Inkar's soft exhale on my cheek. Her gaze fluttered over my lips. Then she retreated, getting into bed and pulling Aino's quilt around her. "Perhaps your father was not the right kind of leader, either."

What do you think? If you want to read more of The Winter Duke, also known as political lesbians on ice, preorder or request from your local library!

Posted by Bookish Fangirl at 6:51 AM No comments: