The book I'd like to talk about is "White Devil". It's a YA fantasy adventure story with triple-POV set in a fictional world. 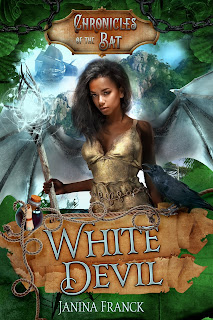 In theory, this is the second book in the Chronicles of the Bat Series, but the story doesn't have a direct dependency on the first book - while the main cast of the first book returns and joins the story (taking over one of the viewpoints in the form of Balthasar, the ex-pirate navigator and librarian), the rest of the characters in the story, including the main character Lilith, are new. The third point of view is taken over by Death herself.
I won't give away too many details, but the main struggles in the story are all about "home". For some characters that means finding a new home. For others that means protecting their home at any cost.
To give you a rough idea - Lilith's home, an isolated mountain regions in the country of Pbecrah, is threatened to be invaded soon, due to a grave and unforgivable mistake by Pbecrah's leader, which cost many lives. Lilith is sent to find a rumoured artifact that may hold the power needed to protect this region, the Highlands, from the invasion and give it the power to distance itself from the country that's at fault, Pbrecah. That is, if it truly exists. She is joined on this adventure by a grumpy talking raven, and a rag-tag group of ex-pirates who are new to this part of the world. Along the way, they explore all sorts of leads, and dig through archives and libraries in hopes of finding a clue, while the situation in the Highlands gets more tense by the day as negotiations fail and villagers have to take up arms.
What will happen exactly, you'll need to find out yourself.

Is this the first book you've had published?

The first book I ever published was the prequel, "Captain Black Shadow", a novel all about pirates and the never ending question of morality - good and bad. I also published an YA Anthology  - "A Touch of Magic", which features six other fantastic authors and their stories alongside my own. Also, spoiler alert, the third book in the series, "Sand & Snow" will be released in April by Snowy Wings Publishing.

Generally speaking, there has to be a spark first. Something that gets my thoughts racing and makes me excited. Once that happens, my brain starts spurting out ideas left right and centre and will reevaluate them until something feels right.
Then I keep thinking about this idea, sometimes talk about it with friends, until a clearer idea peels itself from the wishy-washy idea basin. This part often happens during a car or bus ride. Or when I'm waiting in line somewhere. That's usually when I whip out my notebook and just start jotting my thoughts down. Sometimes, that'll still be pretty vague, but other times I already get a complete story line out then and there.
Either way, the next step is to start writing.
Then, after a few pages, let's say about 5 to 10K in, I usually realize that either, my characters are flat and without real personality, or they start carving a personality out for themselves. In the second case, I can then just take notes on what I notice about them and fill in the gaps. In the first case, I create them from scratch, to determine their past, present and hopes and wishes for their future, character flaws and strengths alike. Little quirks and things like that.
Then I go over what I've written so far, and either scrap it all to rewrite, or just tweak it a little, before moving on to the rest of the story.

Then again, other times, an idea just suddenly, randomly pops into my head and I start writing right away and everything feels right as it builds itself. The notebook comes into play whenever I continue writing in my head but don't have access to a computer.

When it comes to where I write, it doesn't matter too much. My preferences would be in either absolute silence with no one even nearby, ideally not even in the same building, or in a café. (Yeah I know, that one doesn't really make sense to me either, but it seems to get my creative juices flowing).
I do have a few tricks that I know help me out though:

Right now there are two stories I'm actively working on - A sci-fi novel based on a short story (Space witches and technomancy - need I say more?), and a novella (?) about a little Japanese girl stuck in limbo.
There was a third - a dystopian sci-fi novel set in Brazil, but that one needs a little time before I can return to it.

I just started reading a new book I stumbled upon accidentally. It's a cozy mystery with dragons set in England. Who doesn't want to read that? Right?
I'm about four chapters (and character viewpoints) in, and I can only say that so far, I'm loving it. Whenever the viewpoint changes, the (third person) narration clearly reflects that character's personality. It's also quite light-hearted with a few humorous notes sprinkled throughout. And, I'd like to say this again, it's a cozy mystery with dragons.
If you're curious too, check out "Baking Bad" by Kim M. Watt.

Janina Franck was born in the Black Forest in Germany. Growing up there, she shared a room with 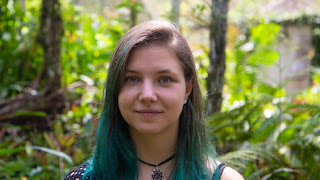 many of her bookish friends, and by that, shall we say, they were the paper and ink kind. Her imagination spurred by her environment and choice in company, she began writing at a young age.
Later on, she moved to the emerald island of legends and myths, Ireland, where she completed her education in Modern Languages and Multimedia. While her surroundings changed, her desire to create stories did not, and she continues to write and work on her stories whenever she’s not busy adventuring.

Posted by Bookish Fangirl at 2:44 AM