Interview with Don Zolidis, author of War and Speech 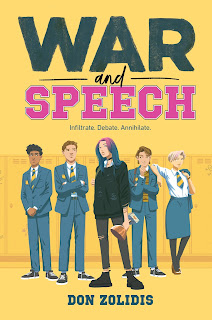 WAR AND SPEECH - it's about a girl who joins the number one high school speech team in the country in order to destroy it from the inside out. It's a bit of a caper book, very funny, about a girl joining a conspiracy to take down the ultra-competitive and destructive speech coach and his squad of hyper-achieving speech bullies. When does your new book release?

I do a lot of pre-writing. For this book, I spent a year as an assistant speech coach at a local high school, drinking in the culture, going to tournaments, etc... I had an idea of where I wanted the story to go, but I'm usually pretty flexible and try to follow where the story leads. I have an outline, but I'm always revising my outline as I go, as the path becomes clearer. When I'm drafting, I try to go for big stretches, shutting down the internet and usually finding a place in a coffee shop to bang out words. What piece of advice would you give to aspiring authors?

KEEP GOING. I wrote 5 books with an agent before I managed to sell one, and with each failure I learned something. Fail, and fail often. The more you fail at this, the better you're eventually going to get.

I'm reading ROSEWATER, which is a Nigerian sci-fi novel set in 2066 with illegal gangs, aliens, zombies, and psychic powers. Really really fun. I just finished LET'S CALL IT A DOOMSDAY by Katie Henry. I love her sense of humor and character.

Don Zolidis holds a B.A. in English from Carleton College and an M.F.A. in playwriting from the Actor’s Studio Program at the New School University. For the past five years, he’s been the most-produced playwright in American schools. His more than 110 published plays have been performed over 30,000 times, appearing in every state, every Canadian province, and 67 different countries.
His first novel, THE SEVEN TORMENTS OF AMY AND CRAIG (A LOVE STORY) was published in 2018 by Disney-Hyperion. His second book, WAR AND SPEECH, will be released in 2020.
Posted by Bookish Fangirl at 2:10 AM