Interview with Cass Morris, author of From Unseen Fire

1. Can you tell us about your latest book?

From Unseen Fireis a historical fantasy set in a re-imagined ancient Rome, where magic shapes 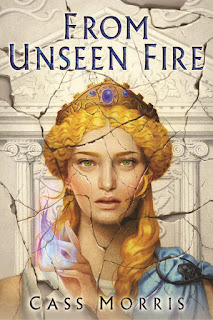 the course of the nation as much as law, war, and politics. Our heroine Latona is a mage who has long suppressed her considerable powers, but she’s growing tired of making herself small for the sake of society’s comfort. As she begins to explore her potential, she’s supported by her sisters, one a canny socialite and the other a budding prophetess, and by Sempronius Tarren, an ambitious senator with good intentions and dark secrets. Together, they will use wit, charm, and magic to shape Aven’s fate, in defiance of foes wielding brutal violence and foul sorcery.

2. How does it feel to be a published author?

There’s a line from the musical Wicked, at the top of the second act, when Glinda says, “Getting your dreams, it’s strange, but it seems, a little, well… complicated.” I think about that a lot. Being a novelist has been my dream since I was eleven years old, and even though I knew it wouldn’t be all candy and rainbows going in, there are more complications than I’d imagined. It’s such a thrill to hold your own book, to see it in stores, to sign it for readers -- but at the same time, writing gets harder. There are expectations to live up to, and it can be hard to remember to please yourself first before worrying about pleasing others.

Chaotic. I am constitutionally incapable of writing in a straight line. I tend to start with some strong images and snips of conversation around which I can build characters, and then once I’ve gotten them colliding into each other for a while, I can figure out what the plot is. Scrivener has been a godsend for me, since it makes it so easy to write non-sequentially and re-order scenes.

4. What piece of advice would you give to aspiring authors?

Know what you love about the story you want to tell. Keep that as your guiding star.

I’ve generally got a few different books going in different formats. Currently I’m working on Domina: The Women Who Made Imperial Romeby Guy de la Bedoyere in print, Lady Hotspurby Tessa Gratton in ebook, and I’m waiting for the The Art of Theftby Sherry Thomas to come available from my library in audio.

Bio: Cass Morris works as a writer and educator in central Virginia and occasionally moonlights as 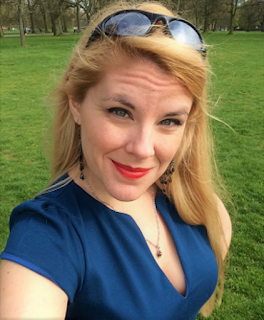 a bookseller in the Outer Banks of North Carolina. She completed her Master of Letters at Mary Baldwin University in 2010, and she earned her undergraduate degree, a BA in English with a minor in history, from the College of William and Mary in 2007. She reads voraciously, wears corsets voluntarily, and will beat you at MarioKart. Her debut novel, From Unseen Fire: Book One of the Aven Cycle, is a Roman-flavored historical fantasy released by DAW Books.

Posted by Bookish Fangirl at 3:07 AM