Interview with AS Youngless, author of For Hire

1. Can you tells us about your story and the anthology it's featured in?

My story, FOR HIRE, it the tale of a teenage werewolf named Jenny, who works as a hired assassin each full moon. The story begins with Jenny and her handler, Peter, talking to a potential client--but things quickly go south and suddenly, Jenny's life unravels. My story is published in Made in LA: Chasing the Elusive Dream, which is the second volume of the Made in LA Anthology series. The editor's description is: Chasing the Elusive Dream explores the fantasies people carry with them to LA, as well as the dreams Angelenos dream while surrounded by this vast and evolving city. This anthology series showcases a diverse range of voices and genres. Literary or contemporary, fantasy, or science fiction, each story in this volume invites you to view this urban landscape through a different lens.The Made in LA Anthology series came to be when Cody Sisco, Gabi Lorino, and Allison Rose set up a 'Made in LA' booth at the annual LA Times Festival of Books. People kept asking which books had the stories set in Los Angeles, and this sparked the idea that they should edit an anthology featuring stories set in Los Angeles. Thus was born the Made in LA Anthologies. They are currently reviewing titles for Book 3. (Name TBA).The reason this anthology appealed to me is I'm a fan of Los Angeles--not the LA everyone else sees on the news, in papers, or magazines--but the history and the culture of the city. It's a beautiful mess which I find relatable.

2. Is this the first thing you've had published?

FOR HIRE is the first short story I've had published.

3. Are you currently working on anything new?

I'm always working on somethings. I've written a handful of other short stories that I'm currently submitting to anthologies, magazines, and online blogs. I'm also plotting a full-length YA Science Fiction Novel, but it's in the early stages and not ready to be discussed. (But I'm excited about it!)

4. What piece of advice would you give aspiring authors?

First, comparing your work to other published pieces is a waste of energy. Don't do that to yourself, ever. Read to enjoy the work, not to compare it to you as a writer. Second, the more you write, the better you get at it. So, even if you don't finish the story, novel, poem, etc., you'll be a better writer for having started it. Also, the only way to fail is to quit. Take breaks, but don't give up. 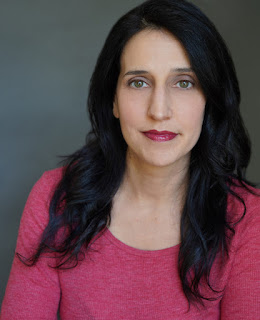 AS Youngless has been passionate about writing since her childhood. She runs the Graphic Novel Book Club for elementary aged students in the hope of sharing her love of writing with the next generation. She is the debut author of, “For Hire,” and lives in beautiful Los Angeles with her husband, son, and multiple animals.
Posted by Bookish Fangirl at 2:35 AM