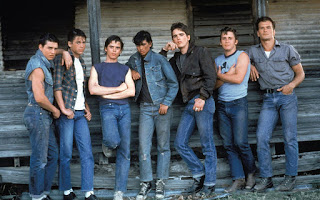 There are two kinds of people in this world: Greasers and Socs. Which one are you?

The terms come from S.E. Hinton's novel The Outsiders. It's a classic of young adult fiction and if you haven't read it, shame on you! There's a movie, too, which I have fondness for in spite of the fact that Tom Cruise is in it.

It's a story of two gangs: The Greasers and the Socs.

Socs take their name from "socials." They are children of privilege with letterman jackets, nice cars, and an overinflated sense of self importance. They are definitely the bad guys. Hinton's sympathies (and the readers') are solidly with the Greasers.

Greasers have it rough. They don't have "good" parents or even any parents at all. Their lives are impacted by need, violence, neglect, and substance abuse. They meet with societal censure for their clothing and homes. They are from the wrong side of the tracks.

It might be a very simple world view, but I think all of us are either Greasers or Socs. Once we are adults, it's more about your life attitude than your socio-economic-status, but the designations hold. Let's talk for just a few minutes and I'll tell if you are one of us or one of them.

I'm a Greaser. Compared to some of my childhood friends, I grew up privileged. But I still know what it's like to have to wait for things I need and not be able to get things I want. I've seen ebb and flow in income and know that sometimes you have to look at the long game. You have to sacrifice in one area to do what is needed in another. Because I couldn't and can't have whatever I want when I want it, I have learned to prioritize needs and wants and to appreciate the things I have. I try to help others. Us Greasers are in this together. We support one another.

“That's why people don't ever think to blame the Socs and are always ready to jump on us. We look hoody and they look decent. It could be just the other way around - half of the hoods I know are pretty decent guys underneath all that grease, and from what I've heard, a lot of Socs are just cold-blooded mean - but people usually go by looks.”
― S.E. Hinton, The Outsiders


For this reason, parents, I argue against raising Socs. Even if you have the income to do it, you don't do your children any favors by raising them with a sense of entitlement and self-importance. It's a dangerous road, slick with oils and without enough guardrails. It's easy to veer off the path into questionable morality and then into outright illegal and immoral acts. Socs can go a long time without getting caught, the cost to the soul notwithstanding, but when the consequences catch up to them, it's spectacular. There are washed out mug shots and corpses littering the ground.

We all want our children to do well, but there's a difference between handing your children everything and giving them the life skills they need. Greaser children have empathy. They know that it's important to work hard and do well for themselves, but they also know that their needs might not be the most important needs in the room at any given moment. They understand that resources are limited and that they should go to those in deepest need first. They try to solve problems themselves, and are patient about waiting for help when it is needed.

I'd rather teach a room full of Greasers than a room full of Socs. Soc children will constantly call for my attention over things it is entirely possible to solve for oneself. They want the validation of my attention, even when they are snatching it from another child who needs it more. Greaser children will try to help each other first. Only after they've exhausted their options will they ask for help. When they get help, they remember to say thank you for it.

In fact, I prefer Greasers to the point that I have to watch my bias in my interactions with others, keep myself from assuming you're a Soc on the inside based on the appearance of your outside. I have a basic mistrust of people who are too pretty, especially pretty in a polished, practiced way. It makes me wonder about your priorities. If your surface is too smooth, I doubt you have depth.

“It seemed funny that the sunset she saw from her patio and the one I saw from the back steps was the same one. Maybe the two worlds we lived in weren’t so different. We saw the same sunset.”
― S.E. Hinton, The Outsiders


One of the themes in the novel was the idea that we all watch the same sunset. It's another version of the old saw about all living under the same sky.  It's a nice idea. But I wonder about its truth. Maybe I'm just getting cynical as I get old, but I truly wonder if the Socs of this world really do see the same sunset I do. If we view it and interpret it so differently, is it really still the same sunset?

Posted by Samantha Bryant at 7:35 AM

Email ThisBlogThis!Share to TwitterShare to FacebookShare to Pinterest
Labels: classics, posts by Samantha