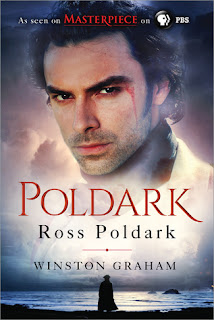 Poldark has made quite a splash in the latest televised version. It's a big hit with many of my friends, with old fashioned eye candy in the Colin Firth and "the shirt" sort of way, coupled with sweeping vistas and fast moving dramatic relationship driven plot lines. I'm a big believer in "read the book first" when it comes to adaptations of literature, so when one of my book clubs chose Ross Poldark, I was excited to find out what all the fuss was about.

I did enjoy the book, in a light, escapist popcorn sort of way. For me to be able to love it more deeply, it would have to be a deeper book.

In some ways, this read like an outline for a book. Obviously, I'm supposed to feel for Ross Poldark and be cheering for him. And I do, at a certain level. If I list for you the circumstances of his life, there's a lot to elicit interest and sympathy. War veteran returns home to find his father dead and his family home basically in ruins and has to rebuild his fortune while dealing with a broken heart.

Yet, even though the book centers around this man, he's strangely passive in his own life. Things happen around him, and he seems to make choices that earn him praise among the common folk (rare for someone of his more aristocratic birth), but I never feel as though he did anything particularly on purpose, or thought further ahead than the moment in front of him. He doesn't have an interior life or strong opinions. So, instead of the main character, he feels like a guy I hear vague rumors about.

I was put off by the romance with Demelza, even though I did like where it went once they were together. The fact that she comes into his life as a child and basically grows up in his care, then awkwardly seduces him because she doesn't want to go back to her father…well, so MUCH of that gave me the wiggins. I like Demelza a great deal as a character, but the yuck factor in how this romance came about takes the enjoyment out of it for me.

As a writer myself, I was confused by some of Graham's choices as to what to show and what to leave "off screen" to tell us about later. Several times, there was a big, dramatic moment with no conclusion, and the next chapter picked up with something mundane and threw in how that drama ended up as a sort of throwaway: "by the way, folks, she didn't die after all" or "oh yeah--he married her." Huh?

So, it was a nice, light read. And I will probably watch the TV adaptation now. I hear the Demelza is closer to Ross's age on screen and more his equal in a lot of ways. That modernization might help a great deal.