Unpopular Opinions: Gilmore Girls is Not that Great 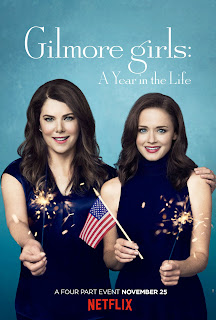 I'm sure you've all heard that Netflix did a new Gilmore Girls show. It's old news, but I don't have that much time for TV, so I'm just getting to it.

I didn't watch the old one when it was on, but thought I should now that people are talking about it again. It's one of those shows that I've heard a lot about. Lots of intelligent women I like and admire enjoy it and I always intended to watch it someday.

I don't quite hate it enough to walk away. I'll still watch more. But I definitely don't love it.

Dialogue:
People who told me I'd like the show praised the dialogue.

And, yes, there are some cute bits. I tend to like Luke's rants better than Lorelei's. I snorted during a recently-watched episode when Luke went on about how unprepared he was to become the sudden parent figure for his nephew. "I have no patience for jam hands!"

But these bits feel like staged monologues to me, or maybe dialogues when Lorelei and Rory do one together. Kind of like bits by Abbott and Costello, but with less real emotion and more elbowing you to make sure you've noticed how clever they are.

In short, the dialogue is fun, in a plastic, surface-y, insincere way. But it doesn't move me. 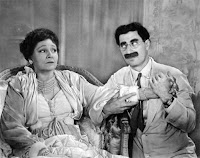 So, this town is on quirk overload.

I enjoy some good quirky characters. As a younger woman, I was half in love with Chris in the Morning on Northern Exposure, another show set in an imaginary town full of odd people.

But there's too much quirk for me in Stars Hollow. When everyone is bizarre, the bizarre gets boring. You need a straight man for the comedian to play off of. But here, everyone is Groucho Marx and there's no Margaret Dumont.

When I lived in Nome, Alaska, I used to joke that instead of a town drunk, they had me: the town sober. Stars Hollow doesn't have one! Even the curmudgeons are just a different brand of quirky. Thank goodness for the outsider perspective of characters like Dean and Max who can at least see that this place is a few sandwiches short of a picnic.

And Lorelei is here to out-quirk them all. She's the manic pixie dream girl sent to torture Luke and we're supposed to cheer for them to get together. I'm like, "Luke, Dude, back away from the manic pixie. Those things will eat you alive!"

Lorelei is beloved among the quirk-tastic denizens of this town above all others. I'm waiting to see why. So far, she seems just irresponsible and self-centered, only interested in other people to the degree that they are foils for herself. The way she treats Sookie, for example, grates on my nerves. Friendship, dear Lorelei is a two-way street, and you are a terrible friend.

Which leads me to my biggest complaint:

I don't believe this story. I have no trouble watching shows that are patently untrue and feature characters doing things that are physically impossible like flying or running at the speed of light or reading minds or any number of crazy things. But, I have to be able to lose myself in the story, accepting the world around me as real, believe that the characters can do the things they do. And I just don't do that on this show.

The backstory, as I understand it so far is: 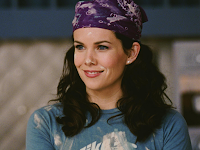 Lorelei was a poor little rich girl who didn't want her debutante life. She got pregnant at sixteen, ran away from home, and settled in this tiny town not too far from where her parents lived. She convinced a woman who owned an inn to employ her and give her a place to live with her infant and, over the next sixteen years, worked her way up until she is now running the inn. The child she raised alone while doing all of this is a Mary Sue of a girl with no serious bad habits or scars from her poorly supervised childhood.

I don't buy that Lorelei had the gumption to build a life for herself whens she'd been raised a pampered rich girl.

And even if I could buy that, I don't buy that this sixteen year old child had the patience to raise a baby with such care and love, even while working full time to keep them in food and shelter, that they are now so close it's of interest to Freud.

I don't buy that the kid came through unscathed: kindhearted, generous, bookish, ambitious, and of chaste habits.

I've been a single mother. It was only for two years, thank G-d. I was thirty-two. I had the support and help of my parents. I was lucky. And it was still freaking hard! I was exhausted all the time.

Lorelei, as portrayed so far, isn't woman enough to have done all she is supposed to have done.

And if she were, why would she give up so quickly on funding her daughter's education without mommy and daddy's checkbook? Surely Stars Hollow could have funded her with a giant quirky festival that raised the tuition dollars if her independence was that important to her.

Conclusions:
Gilmore Girls is glib. I value sincerity and deep emotions (in life and in fiction). This show has a pretty surface, but it admires itself too much. While there are some things about it that are refreshing and interesting, after watching 1.5 seasons, I'm afraid I still don't get it.

So what do you think, people of the Internet? Want to help me understand what's so great about this show? Tell me I'm wrong? Agree with me? Please comment below. I'd love to know what you think, too.

Email ThisBlogThis!Share to TwitterShare to FacebookShare to Pinterest
Labels: posts by Samantha