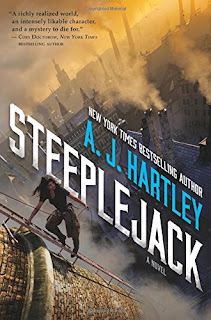 This is a brave and wonderful book, tackling race and class in the context of political intrigue and a murder mystery through the eyes of a 17-year-old steeplejack. If you like historical fiction coupled with suspense and thriller elements, this story is for you.

The world building for Bar-Selehm (a fantasy version of South Africa) is deep and fascinating, and deftly interwoven into the story so naturally and organically that you don't notice it as you read, but find yourself immersed. This post colonial historical fantasy never becomes pedantic or lingers too long in exposition, but still really paints a fascinating world.

The three main kinds of people we encounter are the white colonial Feldish people, Lani immigrants descended from indentured servants (like the main character), and indigenous black Mahweni people, both city-dwelling and unassimilated. We see a variety of characters of all three groups and get a good cross section of the city.

Anglet or Ang, the main character, is pretty amazing. Not only is she physically adept enough to make her living as a steeplejack, which involves climbing to dizzying heights and repairing masonry, she's also smart, independent but still connected to others, and insightful. She's physically strong, and making it as a young woman in what is essentially a job for boys (not even men, because most don't live that long).

I quickly found myself on her side and cheering for her, which is a good thing, since the novel is entirely in her perspective. If I have one complaint about her, it's that she's a little too perfect, stopping just this side of being more properly named Mary Sue. But there were enough times that she needed to rely on others, that I was able to forgive the slightly implausible range of her skill set.

For most of the book, the pacing is beautiful, giving us hints of what to come at the right time, but not giving things away too soon or manipulating too broadly with red herrings.

Unfortunately, the ending felt rushed, to the point that several lingering plot points were resolved by looking into a single carriage at the end of the climactic scene and finding that not only were situations we worried about resolved, but the people involved were all in the carriage. My suspension of disbelief was also stretched thin by the number of things one of Ang's friends was able to resolve for her so quickly, the one time that the difficulties a person of his race might have in being heard by the right people was ignored. I was glad he succeeded, but part of me doubted he could have.

If not for these few flaws, which are small in the scheme of things, and didn't really interfere much with my enjoyment as I read, I would be able to call this a perfect book. The language is beautiful and I marked several passages for their poetic nature or spot-on insights into larger philosophies. Bravo!

Review by Samantha Bryant, another bookish fangirl. You can learn more about her and her work at http://samanthabryant.com

Posted by Samantha Bryant at 6:00 AM