Review: Classic Reads: We Have Always Lived in the Castle 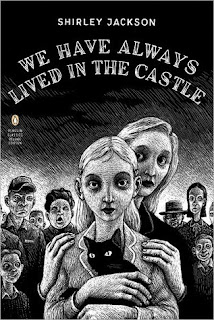 I've been a bit of a re-reading kick.

Partly, this is because I'm in a classics book club at my library, and about half the time the book club selection is something I've already read. I was, after all, a high school English teacher for a decade or so, and have been a reader all my life, so I've read a fair amount of classic literature. Up till now, I've not really been a re-reader. There are so many books out there I haven't yet read yet that it's hard to decide to go back for something instead of taking something out of my endless TBR pile.

But re-reading is a different kind of experience, especially if many years have passed between reads and you are now a different person in a different phase of life than you were when you first read it. Some books don't hold up, and you wonder what your younger self was thinking. Some books are improved because you are in a place your life that connects with that story better now. Some books are deepened by revisiting them.

We Have Always Lived in the Castle by Shirley Jackson is one of those books for me.

Shirley Jackson was a writer I read at a very impressionable time of life, middle school to early high school. Like many students, I encountered her short story The Lottery, which is probably the most well known thing that Jackson ever wrote. That story raised the hairs on the back of my neck and shocked me. So, I sought out everything else of hers I could find and read it. I realize now that Shirley Jackson is probably responsible for a lot of my own aesthetic as an author: that attraction to the strange, gothic, frightening, and psychological story, full of murky motivations.

When I decided to re-read it, I didn't remember a lot of detail about the book, though it was surrounded with a fondness and a sureness that it would be good. I think I mostly remembered the atmosphere, and that there was a creepy child. I adore creepy children in literature.

I got the audiobook this time from Audible. Bernadette Dunne, the narrator, has a very young sounding voice that is still dark, which was perfect for narrating as Mary Kat, the sociopathic girl at the heart of this story. It was one of those cases where the narration truly enhanced the book.

What I hadn't remembered was the suspense. The slow reveal of what had happened, and how Shirley Jackson was able to surprise me at so many turns by going a different direction than I expected and still thrilling me. Because I didn't remember the plot well, I wasn't sure how the story would end.

The genius is in how Jackson can play on your sympathies. The main character is an unreliable narrator and a frightening person, and yet she has my sympathy. I'm on her side. Hopefully that doesn't mean I'm a secret sociopath.

Having revisited this book, I am renewed as a Shirley Jackson fan and will be rereading all her works, this time with a writer's eye to figure out the keys to her magic so I can steal them for myself.

If you haven't read this or other Shirley Jackson, you should definitely check her out. She's one of those quietly influential writers that many others have imitated, consciously or unconsciously. She took the old fashioned gothic sensibility and intermixed it with psychological horror and domesticity to create a suspenseful and fascinating blend. An under-appreciated genius.
___________________________________