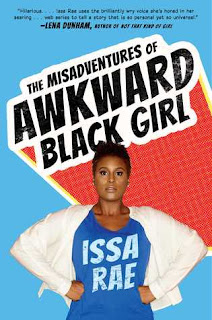 My name is “J” and I’m awkward—and black. Someone once told me those were the two worst things anyone could be. That someone was right. Where do I start?Being an introvert in a world that glorifies cool isn’t easy. But when Issa Rae, the creator of the Shorty Award–winning hit series “The Misadventures of Awkward Black Girl,” is that introvert—whether she’s navigating love, work, friendships, or “rapping”—it sure is entertaining. Now, in this debut collection of essays written in her witty and self-deprecating voice, Rae covers everything from cybersexing in the early days of the Internet to deflecting unsolicited comments on weight gain, from navigating the perils of eating out alone and public displays of affection to learning to accept yourself—natural hair and all.A reflection on her own unique experiences as a cyber pioneer yet universally appealing, The Misadventures of Awkward Black Girl is a book no one—awkward or cool, black, white, or other—will want to miss.


On a whim I picked up an ebook of The Misadventures of Awkward Black Girl the other day - it was on sale on Kindle (it might still be, actually!) and I'd heard bits and pieces about it. (For example, it is often compared to Phoebe Robinson's You Can't Touch My Hair, a book that I have been meaning to read for quite some time now). I'd not actually watched the YouTube series but I wish that I had - I think reading it in Issa's voice would have made the book even more entertaining. (You can watch the first episode below! I've watched the first couple and they're really funny. I'm definitely going to watch more.)


Issa writes fantastic stuff about growing up in the 90s, being a fat woman, and what early internet chatlines were like. Unlike a lot of memoirists, she doesn't go through her life chronologically, but rather skips backwards and forwards throughout her life. Although it wasn't as structured as I may have liked, it seemed to work with Issa's mildly chaotic and extremely awkward personality. One of the most interesting parts of the book is when she talks about how she doesn't want to be forced to talk about race, because being black isn't what defines her.

Saying that, however, some of the best chapters are to do with race. She talks a lot about her complicated relationship with her hair (at one point deciding to shave it all off in an effort to begin the relationship once again) and how she does not fit in with stereotypically 'black' culture. One of the best chapters is the Awkward Black Girl Guide to Connecting with Other Blacks, in which she talks about the different ways that awkward black people talk to other types of black people - including the 10% black, the hustling black, and the militant black. Now, I am not a POC myself, so I really can't comment on it, but it really did remind me of some of the sections of Dear White People - that is, it was screamingly funny.

I really would recommend The Misadventures of Awkward Black Girl for those who are looking for a palate-cleanser of a book. Light and funny, this memoir still manages to discuss serious topics whilst describing some of Issa Rae's most awkward moments.
Posted by Unknown at 12:55 PM