Unpopular Opinion, Or: An Instance Where the Movie Might Be Better Than the Book

I'm guessing that quite a few of you reading the title of this post will wonder what I'm thinking. How could an adaptation of a beloved book possibly be better than the ink and paper original? I used to think that way too and vehemently stand on the side of the book. I said it was always better, no exceptions.

Except, as I got older and started thinking about it, I realized that there were, in my opinion, a couple of instances where I thought that the adaptation was either a) a version of the story that added or subtracted certain elements that made the work better as a whole or b) a flat out better version that cut the crap and made it much more enjoyable, whether it was through eliminating unnecessary secondary characters, altering who had what story line, etc.

Today I'm going to share with you a few instances where I believe that the adaptation was better than the book. This week: Coraline. The book: written be Neil Gaiman. The movie: directed by Henry Selick.

I don't expect everyone to agree with me and if I've accidentally offended one of your favorite stories, I am very sorry. The opinions stated herein are mine and mine alone. Also, a SPOILER ALERT is in affect here, as I will be talking about details regarding these films and books. 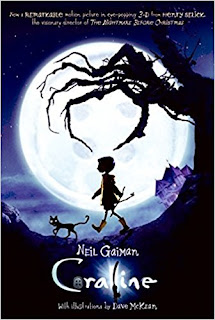 Coraline is one of my favorite Neil Gaiman stories, but the stop motion film adaptation by Laika Studios brought the story to a whole other level. 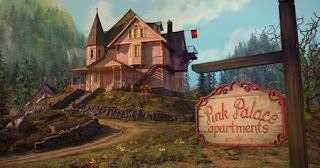 The book takes place in England while the movie takes place in the US (Oregon, I think?). Coraline has moved from Michigan to Pink Palace Apartments, a former mansion that has been converted into apartments. The description in the book of Coraline's home was always a bit difficult to picture for me: which apartments were on what floor, who lived where, in particular where the door opened, that sort of thing. Being able to see the actual apartment building made things much better, plus I think that by giving Coraline's family more room in the overall building made sense, considering the adventures she goes on. 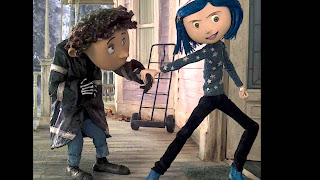 In the book, Coraline never has anyone else her age to interact with. By adding Wybie, a boy whose grandmother is the owner of the Pink Palace, the screenwriters added more content to the mystery of the Beldam, the villain of the piece.

It's revealed through the movie that Wybie's grandmother is a twin, whose sister was one of the victims of the Beldam. The two girls used to live in the Pink Palace and ever since her sister was taken, Wybie's grandmother has retained ownership of the building in an attempt to prevent anymore children from being taken. Wybie even says:

Surprised she let you move in. My gramma, she owns the Pink Palace. Won't rent to people with kids.

With another child her age, Coraline has someone to bounce her issues off of, even though he doesn't believe her. She has someone to almost have fun with, giving her another reason to remain in this world rather than the tempting Other realm. Also, while there were ghosts in the book, they didn't connect to anyone in Coraline's immediate life and thus were less personal than they are in the movie. 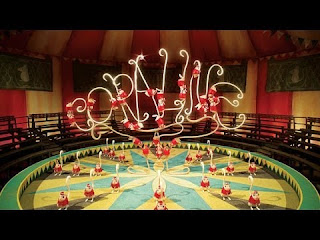 While there were glimpses into some of the things that Coraline got to see while in the Other realm in the book, these were expanded and fleshed out in the movie. She wasn't hesitant to stay in the movie, or least not as quickly as in the book. The mouse circus was flashier and she had a "friend" to share it with (the Beldam having made a fake Wybie for her). 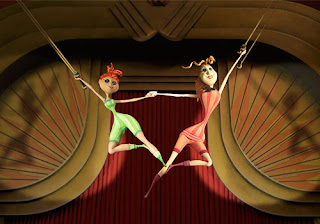 The show that Misses Spink and Forcible perform, for example, is different in the movie. It's a fabulous circus act that showcases the wonder that Coraline is sorely craving. This may have something to do with her age, as well, because another thing that was changed from the book to the movie was Coraline's age. 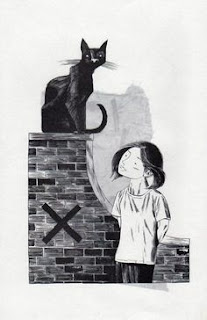 In the book, Coraline is about 10 years old, though potentially younger. She's just past the age of playing with dolls and having tea parties, though she still has the accouterments for these games (pivotal in the final showdown with the Beldam's hand).

In the movie, while her age is never stated, I think that Coraline is 13. She's stuck at a crossroads in her life, both literally and figuratively. Starting a new school, moving to a new place. Not quite a child that plays with dolls anymore, not quite an adult that's serious about everything. This subtle change gave Coraline a bit more depth, I thought, and made her more relatable. It made the magic of the Other realm much more enviable. I understood better why she might want to stay rather than return to the, as she saw it, restrictive life of her parents. Book Coraline was still young enough to see the darkness of a fairy tale while Movie Coraline was old enough to have dismissed it in her mind, or maybe not believe in it any longer.

I hope you've enjoyed my reasoning as to why I think that the Coraline movie was better than the book (sorry Gaiman!). I look forward to doing another installment of this post next time, looking into the movie and book, The Jane Austen Book Club.