The Melody of You and Me Review 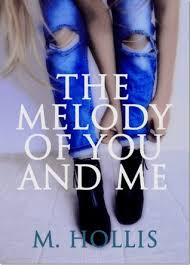 After dropping out of university and breaking up with her girlfriend of three years, Chris Morrison’s life is now a mind-numbing mess. She doubts that working at the small neighborhood bookstore is going to change that. The rest of her time is spent mostly playing guitar and ignoring the many messages her mother keeps sending her about going back to college.

But one day, an adorable and charming new bookseller waltzes her way into Chris’s life. Josie Navarro is sweet, flirty, and she always has a new book in her hands. The two girls start a fast friendship that, for Chris, holds the promise of something more. But is she reading too much into this or is it possible that Josie feels the same way?

The Melody of You and Me is an extremely adorable New Adult romance that I happened to find on Kindle Unlimited. I'm not going to lie, F/F bookstore romance includes pretty much all of my favourite things, so I was destined to like this one. (There were a couple of pretty steamy moments too, which I always enjoy).

First of all, Chris pansexual, and she says so explicitly! When she comes out to Josie, it is so realistic. Even though she knows Josie is a lesbian, this doesn't necessarily mean that she'll react well. There's unfortunately a lot of misconceptions about non-monosexual people, and I thought Chris' apprehension was a really great thing to include. However, as Josie is the human equivalent of a cupcake, she reacts well. I also thought that it was interesting that there is also a brief mention that Chris doesn't feel comfortable ID-ing as bisexual, and I wish the book could have talked about that a little bit more. I'm okay with the fact that it didn't go too into pansexuality though - the novel was far more focused on the romance.

The love interest, Josie is also from the Philippines, and I believe that M. Hollis is Filipinx herself. (Here is a twitter thread where she recommends a whole bunch of Filipinx novels - definitely worth checking out!) I am not sure if the author is pansexual herself, but I am tentatively calling this an own voices novel.

If you're looking for a short and sweet F/F romance, The Melody of You and Me is a great place to start! The sequel, The Paths We Choose, has just been released, and I'm seriously considering jumping back into this adorable, sapphic universe.