The Girl From Everywhere Review 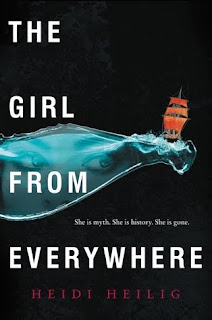 Nix has spent her entire life aboard her father’s ship, sailing across the centuries, across the world, across myth and imagination.As long as her father has a map for it, he can sail to any time, any place, real or imagined: nineteenth-century China, the land from One Thousand and One Nights, a mythic version of Africa. Along the way they have found crewmates and friends, and even a disarming thief who could come to mean much more to Nix.But the end to it all looms closer every day.Her father is obsessed with obtaining the one map, 1868 Honolulu, that could take him back to his lost love, Nix’s mother. Even though getting it—and going there—could erase Nix’s very existence.For the first time, Nix is entering unknown waters.She could find herself, find her family, find her own fantastical ability, her own epic love.Or she could disappear.

The Girl from Everywhere by Heidi Heilig is an adventure in what YA can be. Diverse, exciting, fantastical, and including quite a lot of time-travelling piracy. What more could you possibly ask for?!

I was immediately hooked by The Girl From Everywhere. For one, the worldbuilding is incredible - if there's a map of a place (even if it isn't real), Nix and her crew can sail there. For example, her friend (and love interest) Kashmir is from a map of 1001 Arabian Nights. Furthermore, if it is a fantastical version of a real land, the myths about the land are true!! This also immediately captured my imagination - could they sail to Narnia, using a map drawn by C.S. Lewis, or something like that?

The characters were also fantastic. Kashmir, a charming thief, is definitely my favourite character. I'm always a sucker for a loveable rogue <3 I really like Nix too - she's got a good head on her shoulders, and the way she immerses herself in new cultures and mythologies is fascinating to me. She also doesn't take crap from anyone, most especially men.

I do wish that the book had gone a little bit more into Nix's mixed race heritage - her mother is Chinese, and her father is (presumed) white American. I'm hoping that the sequel, The Ship Beyond Time, explores this aspect of Nix's past a bit more. For information about representation in the novel, I would recommend reading Shenwei's review which talks a lot about the use of Mandarin. I would never have picked that up, so thanks to Shenwei for pointing out the potential problems there.

Overall, I hugely enjoyed The Girl From Everywhere. I perhaps read it a bit fast, which is why the plot didn't always make sense to me, but I had to read it that fast - I needed to know what happened next!