Hello everyone! I have very exciting news: World Book day is tomorrow! 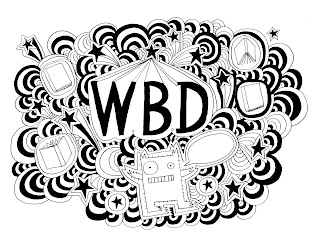 What is World Book Day? According to their website:

Thanks to the generosity of National Book Tokens Ltd, publishers and booksellers, we can send millions of book vouchers to children and young people (some 15 million, in fact: that’s one for nearly every child aged under eighteen in the country). They can take their voucher to a local bookseller and can use it to pick one of TEN (exclusive, new and completely free) books. Or, if they’d rather, they can use it to get £1 off any book or audio book costing over £2.99 at a participating bookshop or book club (terms and conditions apply).

There are all sorts of ways to celebrate World Book Day: many schools allow children to dress up as their favourite book characters, and there are special events at libraries and bookshops. (I have very fond memories of dressing up as Enid Blyton's Naughtiest Girl in School!) You can look up if your local bookshop is celebrating by going here. Even more excitingly, this is the 20th anniversary of World Book Day! Here are the 2017 choices for the £1 books:

I'm going to specifically talk about the middle grade and YA books (the last four).

Butterfly Beach by Jacqueline Wilson: this is a story specifically written for World Book Day, using the characters from The Butterfly Club. This looks kinda interesting, as it involves triplets.

Island by David Almond: A coming-of-age story about a girl called Louise and a Syrian boy called Hassan. Finally, some diversity!

Dead of Night by Michael Grant: An alternative WW2 story, an American soldier is visited by the ghosts of wars past, present and future.

In terms of diversity, these books aren't much better than last year. It is also a bit of a pet peeve of mine that the authors are all well-known. I can understand why these authors were chosen - they will definitely sell - but it is such a shame that children aren't being exposed to lesser-known authors. Even a collaboration between well-known illustrators and lesser-known author would be better!

What do you think of the World Book Night choices? Are you doing anything to celebrate? Let me know!
Posted by Unknown at 9:00 AM