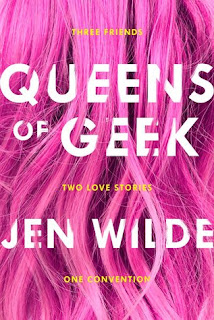 When BFFs Charlie, Taylor and Jamie go to SupaCon, they know it’s going to be a blast. What they don’t expect is for it to change their lives forever.
Charlie likes to stand out. SupaCon is her chance to show fans she’s over her public breakup with co-star, Jason Ryan. When Alyssa Huntington arrives as a surprise guest, it seems Charlie’s long-time crush on her isn’t as one-sided as she thought.
While Charlie dodges questions about her personal life, Taylor starts asking questions about her own.
Taylor likes to blend in. Her brain is wired differently, making her fear change. And there’s one thing in her life she knows will never change: her friendship with Jamie—no matter how much she may secretly want it to. But when she hears about the Queen Firestone SupaFan Contest, she starts to rethink her rules on playing it safe.

I was lucky enough to receive an ARC of Queens of Geek from Netgalley in exchange for an honest review. These thoughts are all my own.

Simply put, Queens of Geek would have changed my life if I had read it at 14. It is intensely nerdy and funny and real. It so consciously talks about topics that affect young people everywhere. In this rather short book, Wilde manages to talk about slut-shaming, body consciousness, racism, sex, and a whole myriad of other topics. Internet fame and the sexism that is often part and parcel of being in a famous relationship are also heavily commented on.

The two protagonists, Charlie and Taylor, are magnificent. Charlie is Chinese-Australian and bisexual, and Taylor is fat and has anxiety and autism. I cannot comment on all of these representations, but I thought that the depictions of bisexuality and anxiety were magnificent. Taylor's anxiety was particularly well done. There's a great exploration into panic attacks and social anxiety, and how she uses fandom and her Tumblr account to help combat them. Anxiety is a central part of her experience of the world without becoming a part of her. I loved that.

I don't think I have ever read a book where I connected so closely to both of the main characters. The narration is split between the two, and I can honestly say that I enjoyed both strands of the story equally. I normally hate it when authors decide to have multiple narrators, so this was a really big thing for me! Their voices are distinct and their understanding of themselves and the world around them is complex - I can only give props to Wilde for her characters, as they really were the highlight of the book for me.

My one critique is that there is a bit of insta-love - if the book had been longer, this wouldn't have been a problem. However, my enjoyment of the book and the complexity of the characters were in no way affected by that. In all, I am so incredibly glad that I was given an opportunity to read this book. I will definitely be recommending it to YA fans of all ages.