One Night backstory by Deanna Cabinian

One thing authors get asked about often is where they get their ideas from. The idea for my contemporary 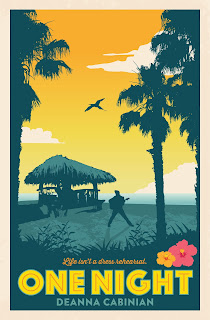 YA novel, One Night, can be traced back to six years ago. One Night is about a heartbroken teen in Honolulu who befriends an Elvis impersonator and embarks on a journey to help him find the one who got away.

In 2010 I was working at a job I hated. I had some money saved up and decided to quit and travel for a while. One of the first trips I took was a road trip to Graceland with my sister. Up to that point we had thought Elvis to be somewhat overrated. We just didn’t get it. But when we drove into Memphis and later visited the King’s estate it all became clear: the man was a musical genius. On that same trip we saw an exceptional Elvis impersonator who was skilled at charming the crowd. This was the first time I thought an Elvis impersonator would make a great character for a novel.

Another trip I took during my sabbatical was to Maui to work on a house with Habitat for Humanity. Every couple of days we would take the day off to go sightseeing. We drove the postcard-beautiful road to Hana, went snorkeling, and partied at a luau. I fell in love with everything about Hawaii: the people, the weather, the food. When I started working again I made friends with a coworker who was half-Hawaiian. She left the company for a job in Honolulu, but we stayed in touch and I visited her. Again I was enraptured by the beaches, the culture, and the friendly spirit of Hawaii.

In the summer of 2014 I started writing a novel about an Elvis impersonator who was getting ready to quit show business. I wrote ten-thousand words and got stuck. In the fall I was walking to the train station after work one day and the character of Thompson (the main character of One Night) popped into my head. I got this vision of an awkward teen in Hawaii, and he would be friends with the aforementioned Elvis impersonator, only the Elvis guy would be young not old. In March 2015 I completed the first draft.

I wish all ideas came to me the way this one did, but really, this novel was six years in the making.

To receive a free preview chapter of One Night and be notified about giveaways, sign up for my email list.

Deanna Cabinian has worked in radio, television, and magazine publishing, but her greatest passion is writing. A graduate of Northern Illinois University, she has a bachelor’s degree in journalism and a Master’s degree in sport management. Her debut novel, One Night, will be released on September 5. Find her online at deannacabinian.com.

Posted by Bookish Fangirl at 10:49 AM