Spend some Cowboy Time with the bestselling authors who brought you Cowboy Up 1 and 2. 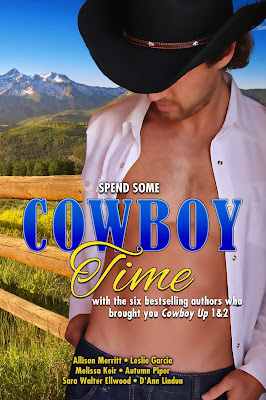 A book bundle by some of the hottest Western authors around. Each story is unique… from sweet to sizzling with a story sure to please fan of Western Romance.

Happily Ever After, Cowboy by Allison Merritt

She’s planning the wedding of her dreams with a pretend groom and a fake ceremony. What could possibly go wrong?

After her best friend's cousin's wedding goes bust, wedding planner Valentine Hart receives the opportunity to use the package for her own benefit. A photo shoot to advertise and bring all her former clients back. But what to do with the wedding dress? And the honeymoon package?

Todd Dayson, buckle bunny chasing cowboy, is at the end of his bull riding career. But in exchange for a blow-out retirement party, he's agreed to help Val put together a great shindig for her wedding business--by becoming her pretend groom. Trouble is, as much as he loves the temporary convenience of a one-night stand, after a hot kiss with Val, suddenly he's not too sure marriage is the trap he always believed.
When Val's ex-boyfriend comes sniffing around again, Todd's hackles go up. Either he has to make his move and get Val to believe they're meant to be, or he might lose her to the guy who broke her heart.

Every cowboy needs a little Magic in his life…

Alex Thornton puts aside defending his rodeo title when his stepmother Stella sends him to spy on her estranged grandmother—and the young woman about to inherit the Alabama farm Stella wants for herself.
Retired Marine Magic Holmes left California with a broken heart, determined to honor the deathbed promise she made to her grandmother: to live. She survived war—but can she survive small town intrigue?
More importantly, can she survive Alex Thornton’s seductive charms and questionable motives?

A Pigskin Cowboy by Melissa Keir

It’s first and ten but will they fumble or score?

Kane Warner, the favorite tight end of his college football team, had everyone turned on him for throwing a game. Rather than explain why or face the scrutiny, Kane leaves town for his summer internship to regroup and get his head on straight.

Charley Ramsey works at Café French while going to college for accounting. Life in a small town has
always suited her. No drama is her motto and she’ll do everything she can to avoid it.

Being financially secure is Charley’s biggest dream. Clearing his name is Kane’s. When the media comes looking for the big story, will Kane and Charley’s relationship survive the drama or will the football player run again?

Everyone knows his area of expertise falls squarely between the sheets, but nobody knows his best friend just asked him for a crash course in all things sex.

Keep calm and help a girl out:

Colin relishes living up to his reputation as a player, until his fooling around affects his grades. Losing his scholarship gets him booted out of college and lands him back home on the ranch with some strongly worded advice from his dad about staying away from women. Speaking of women, though… He’s barely ever noticed his childhood pal Violet is female, let alone one he’d like to get horizontal with, but now that he’s back, he can’t seem to think of anything else.

Keep calm and learn from the best:

When none of her relationships move past first base, Violet guesses she must be doing something wrong. Lucky for her, Colin the Casanova is back in town. He seems like a natural choice to tutor her, until she realizes he’s the only guy she’s ever wanted to get physical with. Too bad they agreed they’ll go back to being friends once the final exam is over….

What happens in Vegas stays in Vegas; that is until the heart is involved…

Jaded romance author Sadie Martin is stuck in Vegas for her best friend's wedding. To dodge a wedding date she can't stand, she slips out and finds herself in a honky-tonk where she enjoys the surprise performance of her favorite singer, country superstar hunk, Chris Saint James.

When a cowboy sits down beside her after the show, she wants nothing more than to stomp on his Stetson with her six-inch stiletto, until he asks to buy her a drink. She's utterly dumbfounded when she recognizes the younger sexy man as none other than Chris Saint James. Once she gets over her star-struck moment, he asks her to dance. The desert heat has nothing on the fire they set with just one touch.

When the incredible week is over, Sadie leaves him to go back home. But will she give up her freedom to risk a relationship with Chris when he puts his heart in a country song on national TV.

Friendship, passion and so much more…

Afraid to love, Lily Halderman is determined to never feel despair like when she lost her husband to cancer. Left alone to continue their custom farming business, she struggles to stay afloat, both financially and emotionally. Until Will comes along to help with the farm, impressing her with his hard work ethic, and presenting a danger to her heart because he is just the kind of man she could love.

Will Wainwright is running from the pain of the past. Feeling responsible for the death of fellow soldier—the woman he loved—Will takes a job working for Lily, hoping the dawn-to-dusk labor will help him forget his sorrow. But, Lily’s grit and determination to move forward catches him off guard.

Friendship turns to passion …but can they heal one another?

Posted by Bookish Fangirl at 2:44 AM