Today is the cover reveal for Rex, by Adam Rocke, Mark Rogers, and Cody B. Stewart. 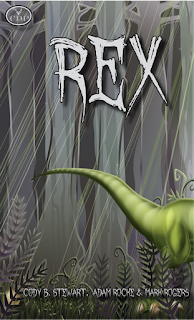 When eleven-year-old TJ finds a weird looking egg in the Florida Everglades after a tropical storm rips through, naturally he takes it home for identification. It could be the egg of a mutant duck or something, which would be awesome. Problem is, the egg doesn’t look like it came from a mallard, even a mutated one—it’s too big and heavy and…strange. So he hides it away in his closet and continues on with his life as usual, doing his best to ignore the creepy men constantly banging at his front door and the significant rise in military helicopter sightings in his typically quiet neighbourhood.

Then one day he comes home from school and it’s as though a hand grenade has gone off inside his bedroom. Suddenly, TJ knows he’s dealing with something a little more interesting—and a little more deadly—than a duck.

Cody B. Stewart was born in the Adirondacks, in Upstate New York. His love of stories began in those mountains as he vanquished trolls, fought in the American Revolution and discovered his latent mutant powers. Stories have continued to consume his life, but he now plucks them out of his head and puts them down on paper in the form of novels and comic books. He left the Adirondacks to grow into a man, did so, and has since returned with a wonderfully supportive wife and two sons.

Adam Rocke Slutsky never met an adventure he didn’t love. From swimming with great white sharks without a cage, to jumping out of a plane without a parachute, Adam’s adrenaline junkie tendencies play a major role in his writing. Throw in a secondary degree in CryptoZoology and it’s anyone’s guess where Adam’s literary travels will take him.

Mark’s career as a travel journalist has brought him to 56 countries and counting. These trips have fed his imagination while at the same time provided authentic experiences and sensory detail that find their way into his novels and screenplays. Mark’s won multiple awards for his travel writing, including an award for his Hurricane Ivan coverage in Jamaica. His work regularly appears in USA Today and other media outlets. Mark lives in Baja California with his Sinaloa-born wife, Sophy, where they recently built a rock house overlooking the sea.

Now that we've shared this awesome cover, we can't wait to share the book!

See you in October!

Posted by Bookish Fangirl at 3:08 AM