Review of Stingers by Graham Downs

Stingers by Graham Downs was an exciting read. Each character had many qualities that made them seem like they were real people. They kept me engaged, as did the storyline. The plot of the story kept me guessing from beginning until the end. If you're looking for a read that will hook you I suggest buying a copy of Stingers. 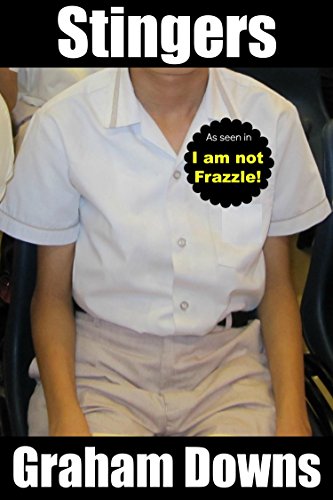 Thirteen year old James Clarke is always being picked on in school. He hates sports, and he particularly hates Stingers, a schoolyard game in which children throw tennis balls at each other. The other kids always seem to throw the ball harder, when it's at him. His physical education teacher, Mr Evans, has no sympathy for the boy, believing he just needs to toughen up a bit.
When James returns home from school after a rough game of Stingers, his mother is mortified when she sees the bruises on his arm and chest. She phones the school to try and put a stop to the cruel bullying of her son.
But her phone call only makes things worse, as the bullying escalates to levels that nobody imagined possible.
Stingers was first published in the charity anthology, "I am not Frazzle! And other stories for grown-ups".
PRAISE FOR STINGERS:
"An exceptional read once again. Found myself completely absorbed and captivated. Look forward to downloading many more."
- Vicky (Smashwords Reviewer)
"An absorbing read - easily done in a sitting. Very topical in South Africa at the moment."
- Ian (Smashwords Reviewer)
"Loved the book Stingers. The emotions of the characters came across effortlessly. Very talented writer!"
- CSnookes (Smashwords Reviewer)
Posted by Bookish Fangirl at 9:44 AM