Check out this awesome cover for the debut You Don't Know My Name by Kristen Orlando! It releases in 2017 from Swoon Reads.

YOU DON'T KNOW MY NAME 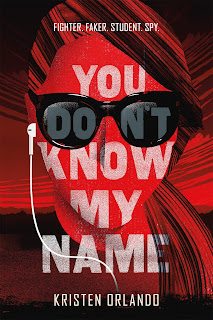 Seventeen-year-old Reagen Elizabeth Hillis is used to changing identities over night, lying to every friend she’s ever had, and pushing away anyone who gets too close. Trained in mortal combat and weaponry her entire life, Reagan is expected to follow in her parents’ footsteps and join the ranks of the most powerful top secret agency in the world: the Black Angels. Falling in love with the boy next door was never part of the plan. Now Reagan must decide: Will she use her incredible talents and lead the dangerous life she was born into, or throw it all away to follow her heart and embrace the normal life she’s always wanted? And does she have a choice at all?


Writing is one of the great loves of Kristen Orlando’s life and she has been lucky enough to make it her living, first as a television producer, then as a marketer and now as a novelist. Kristen graduated with a B.A. in English literature from Kenyon College. She lives in Columbus, Ohio with the other great love of her life, Michael. You Don’t Know My Name is her debut novel.

Posted by Bookish Fangirl at 6:01 PM